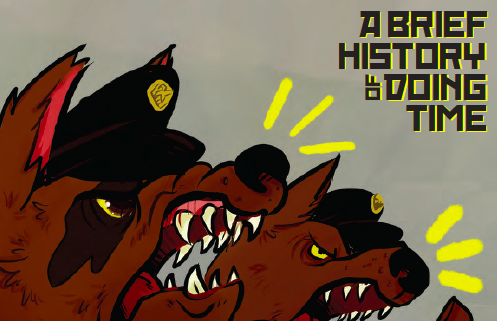 A Brief History Of Doing Time

“Why are you doing this to me?”

“You can walk your fat ass to the phone without the cane!”

The Corrections Officer squeezes the inmate’s throat with his left, pummels face with the right. They tumble to the floor. Cop on top.

Several COs tear around he corner wearing craven smiles. “Ahhh!” screams Willis. “Why are you doing this to me?!”

This beating was predictable. An Erie County Holding Center nurse gave Willis the cane. Fairly obese, and with a severe limp, the old man could barely walk with the stick. But the new CO on duty in the detox ward, the “Trustee’s Dorm,” had a problem with it. “It’s a weapon,” he said hours earlier. “And I fear for my life.”

Corrections officers are petulant little creatures, typically worse than street cops, overly aggressive and under socialized. They create situations to justify their sadistic whims. He and Willis squabbled about the cane all day.

“Dep!” Willis would cry. “I need my cane to go to the bathroom!”

The CO took it away, his nicer shiftmate would give it back, rinse & repeat.

Now over 15 COs stampede into the ward, pink-faced, gleefully anticipating the glorious violence. Late-arrivals had the unmistakable look of disappointment. Poor guys, they’d have to settle for slapping their wives and gay sons around, again, instead of joining this vicious circus of head and kidney punches, the unnatural bending of limbs.

Thirty of us—junkies, pretend junkies, dope-sick criminals, pretend criminals, the sweaty and cold, sniffling and sneezing, puke-breathed and shit-smelling, convulsing and convalescing—look on with horror, fighting the urge to help physically or verbally.

“Turn the fuck around! Look at the fucking wall!” growls one CO.

The subtext: Do not witness us abusing this man or you’ll be next. We peer sidelong, our only protest a sad grimace. That could be us. At any time. “You want me to punch you in the fucking face?” is the COs’ unofficial slogan. Inmates closest to the human piñata party flee their bunks when the pepper spray comes out.

“LOOK AT THE FUCKING WALL!”

I turned myself in yesterday—Tuesday afternoon, per the county appellate court’s ruling. My high blood pressure, and idiot’s honesty, landed me in the Trustee Dorm. Roughly 30 single bunks spread across a dim yet constantly lit room flavored like an asylum.

Half the inmates in here are going through hell. Soaking through their prison oranges, twitching, crawling out of their skin in the way-too-cold, running in & out of the bathroom to vomit, squirt, and vomit into what they just squirted. The tiny, hole-riddled “blankets” do little to fight the chill.

The other half are high. The ECHC nurses administer Klonopin, aka clonazepam, an anti-anxiety, anti-seizure benzo to any inmate who says they have a serious habit. It eases withdrawal. So that’s the scam. You say you bang a gram of heroin a day, or eat 2 bottles of vodka for breakfast, and you get drugs. It’s evident who really needs it.

I take a scant 15mg of oxycodone a day for my back. I’ve done more—worse (better) in the past, and gone cold salami, so I know the agony around me. Or at least a small, unsavory taste. The man bunked next to me has an open wound on his needle- arm so big he can “stick his pinky in it,” though he swears it‘s not from spiking. The sheeny tremors and dark bags under his eyes betray him.

I’m not a serious drinker, but being from a long line of Irish drunks, the DTs buzzing around me are familiar. My father once passed out with his arm in a roasting oven; I still remember the smell—clearer than anything else about him.

Craving nicotine more than anything, I merely had troubling sleeping the night before. Hard to tell if the mild insomnia was due to oxy withdrawal or Willis’s monstrous snore. Echoing through the hall. In my goddamn brain. His unforgiving steel bunk, topped with the flimsiest “mattress,” was directly in front of mine.

Willis’s plastic bin, which all inmates are issued to house their limited “personal” effects, spilled out next to me—the tiny toothbrush, paste, soap, some papers… AND! I snatch the contraband, and toss the pen to arm-hole-guy. He passes it down the line to the guy who’s making playing cards from he sides of milk containers. He’d soon have a full deck—of cards.

Lockdown. Only bathroom. That foul, no-privacy stink. One at a time. Bunk. Ride the bunk. Only—shit!—five days to go. The first day felt like a week. Bunk. Bunk. Bunk. Escape? Is that a thing? Cigarettes. On the outside. Smoke ’em if you got ’em.

At what point does BO become too bad for jail? I do need to escape this fastmoving funk. But can I escape—I mean, the building, if I actually tried?

It’d be a damn good yarn.

A Brief History Of Doing Time

A report by Ian Murphy