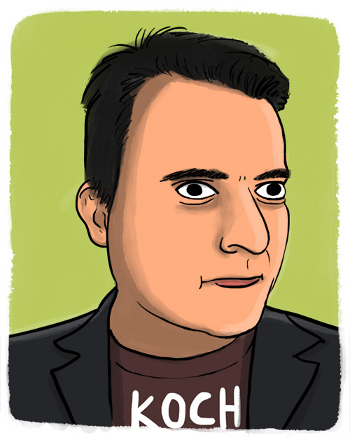 Top ten times that Slate's Dave Weigel has flown to the Kochs' rescue.

To the Koch brothers, Slate's Dave Weigel must seem like some kind of comic book superhero.

By day, Weigel is a mild-mannered wonk, blogging the daily ins and outs in American politics. But when the Koch brothers find themselves in a public relations pickle, Weigel has an uncanny way of appearing on the scene assuring everyone there’s no story here, look the other way now, keep moving along.

Maybe it has to do with the training Weigel received at the Institute for Humane Studies (Charles Koch recently celebrated the 50 year anniversary of the IHS, Koch’s premiere libertarian think-tank); or the lessons Weigel learned during his years at the Kochs’ Reason magazine, or his internship at the Koch-funded anti-affirmative action attack dog outfit, the Center for Individual Rights; or how Weigel's first journalism job at USA Today was "sponsored" by the Koch-funded College Network....

Maybe when you reach a certain level of intimacy with those outfits, they gift you one of those Men In Black memory eraser contraptions, the Neuralyzer. So that every time a distress signal beaming from Wichita or 740 Park Ave reaches his Slate cubicle, Weigel immediately changes into his alter ego, "Cap’n Kochsplainer" — flashing his Neuralyzer beam into his readers’ eyes to protect the Kochs. Next thing you know, Conventional Wisdom is humming that "Don’t Worry, Be Happy" tune again, in sync with the baggertarian community.

To mark the publication of my Meet Charles Koch's Brain investigation in NSFWCORP Print #7 (unlocked for free on the Kindle Store for the next five days), here's my list of my personal 10 Favorite Dave Weigel Kochsplainers. (Caution: Wear sunglasses while reading these, or you too might walk away humming a "Don’t Worry, Be Baggy" tune).

"The reference to GMU's Tyler Cowen as the ‘chief Koch economist’ is pretty risible, but you get the drift. Until the tea party movement started rolling, many libertarians were convinced that the Kochs were throwing money down a rathole, supporting "statist" organizations that were collaborating with, not challenging, power. This is why us Orange Line mafiosos are so surprised to see the Kochs exposed as the Saurons of libertarianism." [Source: "The Original Koch Haters," Sept 1, 2010]

2) KOCH PROBLEM: Huge investigation, ALECExposed.org, by The Center for Media and Democracy and The Nation exposes secretive Koch-funded ALEC which exerts powerful influence over state laws and lawmakers.

"Mother Jones uncovers the Hope Diamond of liberal anger circa-2011....No surprise: Most of the money on this list is coming from people who stand to make even more money in the energy industry if more leases are given out and more regulations are deep-sixed." [Source: "The Koch Brother-Anna Nicole Smith Connection," Sept 6, 2011]

"you can't really argue that the Kochs are ‘deeply involved’ in the shutdown strategy. Unless, you know, it sounds really good to your base to blame the villains they're familiar with for every crisis. Then go ahead, I guess." [Source: "No, The Kochs Aren’t Behind the Government Shutdown," October 9, 2013]

"When it comes to the Kochs, progressives in Wisconsin are ready to believe the absolute worst"

"In sum: They have found the enemy, and it is Koch."

"But how big a role are the Kochs actually playing in Wisconsin?...Thanks to the no-cameras-please PR strategy of the Kochs (none of their Madison lobbyists responded to my interview requests today), these mid-sized donations have taken on mythic proportions."

"How did the Kochs become the villains of Madison?"

7) KOCH PROBLEM: Ian Murphy (a contributor to NSFWCORP), posing as David Koch, prank-called Gov. Scott Walker, exposing in the raw Gov. Walker as a shameless suck-up on his hind legs for the billionaire brothers. Whole country laughing in shock.

"But the details of the conversation hardly mattered to the protesters. To them, the call was a game-changer simply because it existed. Walker took the call; he knew who Koch was; he talked for 20 minutes." [Source: Ibid]

"The Koch Industries Political Action Commitee gave the DSCC $15,000 on March 19, 2009, and $15,000 more on January 13, 2010. Eight months later, the New Yorker published its Bible-length slam on the Kochs, which marked the transition of Koch-bashing from ‘thing ThinkProgress blogged about’ to ‘thing Democrats were comfortable attacking.’" [Source: "The DSCC’s Koch Money," July 8, 2011]

9) KOCH PROBLEM: At the 2012 Republican convention in Tampa, David Koch drew attention as a GOP delegate and as the billionaire pulling the strings, in an election partly defined by America's rampant wealth inequality. ABC News headline, "Billionaire Donors Hide Behind Velvet Curtain at Republican Convention," typified the media's unfavorable framing.

"There he was, all 6'5'' of him towering over New York's delegation to the RNC: David Koch. No reporters were bugging him. Plenty of delegates looked excited to meet him. I felt fairly sheepish about revealing his dining partner on Twitter the night before, and when I approached him, media consultant and former Americans for Prosperity president Nancy Pfotenhauer adds to the sensation....Koch-in-real-life was more fun." [Source: "KochWatch, the Final Chapter: Koch on the Convention Floor," August 28, 2012]

10) KOCH PROBLEM: Kochs are the biggest bankrollers of climate change denial propaganda and propagandists. The book "Super Freakonomics" included a chapter promoting the Kochs’ anti-climate science agenda, subjecting the book to withering criticism in the media.

In an article about the controversy over "Super Freakonomics," Weigel makes the authors appear to be brave mavericks suffering for the truth at the hands of powerful liberal elites. Weigel’s article cites three Koch employed climate denier shills without mentioning the Kochs’ name: Myron Ebell of the Koch-founded Competitive Enterprise Institute, who "isn’t a scientist at all" as Vanity Fair wrote; Patrick Michaels of the CATO Institute, who was caught deceiving Congress to cover up his conflicts-of-interest regarding the Kochs; and Ross McKitrick (another free-market economist with no science background), Senior Fellow at the Koch-funded Fraser Institute. Here is Weigel’s Neuralyzer-zapped revision of McKitrick:

One of those skeptics is Ross McKitrick, a professor at Canada’s University of Guelph whose research suggests that numbers suggesting a spike in global temperature are out of whack. He was hopeful that "SuperFreakonomics" could cut through the "groupthink and political correctness" and expose environmental journalists such as Joe Romm as dishonest activists who can’t accept criticism.

KOCH PROBLEM: Media outlet BuzzFeed held an event on immigration sponsored by the Charles Koch Institute and the Koch-funded Heritage Foundation, just days after a Heritage immigration "expert" Jason Richwine was exposed as a racist who opposed Latino immigration because he believes them to be genetically inferior to whites. Richwine co-authored a Heritage report released days before their BuzzFeed Immigration Reform event, in which Heritage claimed immigration reform would cost the US economy $6.3 trillion. NSFWCORP’s Yasha Levine led a media backlash against BuzzFeed media corruption.

"W-w-what? Well, as a veteran of the Koch-funded Reason magazine, I can report that the libertarian brothers have always put their money behind immigration reform. Maybe that complicates their newfound (well, 3-year-old) role as all-purpose rich guy demons; they're sponsoring a night of debates intended to nudge along immigration reform." [Source: "The Terrifying Koch Brothers Sponsor A Boozy Pro-Immigration Reform Panel," May 9, 2013]

Mark Ames' ebook, Meet Charles Koch's Brain is available for free on the Kindle Store until October 16th. NSFWCORP subscribers can access all of our ebooks for free via the archives.