Saying Boo To A Ghost: It's No Secret Why Congress Fears Crossing The NSA

Credit where credit is due: President Obama promised to end partisan gridlock and bring Republicans and Democrats together. Congratulations, Mr. President - six years into your presidency, you have at last succeeded.

Of course, while we've (temporarily) overcome party divisions, there's still that pesky problem of a wide gap between public sentiment and congressional (in)action. That seems as permanent as ever. Sure, there have been some valiant efforts to force the legislative branch to at least pretend to represent public hostility to mass spying, but let's be honest: even the most "holy shit!"-worthy of the NSA disclosures are still met with at best shoulder shrugs, and more often bird flipping, from those who run Congress.

One example: when the Washington Post last week reported that the NSA "overstepped its legal authority thousands of times each year," loyal NSA apologist Sen. Dianne Feinstein (D) responded only with a non-committal statement that her Intelligence Committee "should" do more oversight - but no attempt to actually do any.

What accounts for the disconnect between public outrage and Washington nonchalance? Is it money? Ideology? Or is it something even more sinister? In fact, it's almost certainly a combination of all three - with the third apparently so taboo almost nobody dares mention it.

That first story of money is the most obvious. The private intelligence industry is a $56-billion-a-year business whose profits are almost wholly dependent on government contracts - and thus, on political decisions in Washington. Consequently, the industry spends lavishly on everything from congressional lobbying, to campaign contributions to Beltway media advertising to hiring politically-connected ex-government officials to enriching future presidential candidates.

Those influence-buying expenditures are, of course, far larger than those mustered by underfunded public interest groups that advocate for civil liberties protections. And so, just like cash imbalances explain congressional votes for corporate-backed tax, trade and regulatory policies that the public loathes, campaign finance data suggest that the surveillance-related cash imbalance is a huge part of why Congress' refuses to curtail the increasingly unpopular NSA.

But, then, in Washington, ideology is often the public face of money - the mask designed to make thugs' wars over economic territory seem like civil disagreements over earnestly held principles. And indeed, an industry with enough money - say, private intelligence services - can transform its purely profit-driven agenda from a set of controversial policy "choices" into a ubiquitous belief system. At that point, such an industry doesn't need to pay a vig to every rank-and-file legislator because the agenda becomes the dominant political culture's de facto ideology. In the case of NSA surveillance, that ideology evinces the kind of Huge Government-ism that defines the Drug War and stop-and-frisk - it simply assumes that ever-expanding surveillance is an undebatably necessary safeguard against terrorism, even though little concrete evidence seems to substantiate such a supposition.

For most political issues, cash and the patina of ideology that cash buys are together enough to guarantee congressional outcomes that defy public will. But this isn't any old issue - the row over NSA spying has dominated the headlines for a full two months, which is an enormous amount of time in a media cycle whose metabolism is measured in seconds. That has elevated the affair to that oh-so-rare level of notoriety in which almost every American - even the least politically informed rube - has heard something about it and has some kind of opinion on it.

That Congress nonetheless hasn't done anything about it - not even anything fake and PR-ish - suggests an insidious fear factor is also at work. No, not lawmakers' fear that without surveillance their constituents will be killed by terrorists, but lawmakers' deeper unspoken fear that if they don't continue supporting such surveillance, their careers could be killed by the NSA.

Consider the deep messaging of the NSA's brand. Only forty years removed from the blackmail-tinged reign of J. Edgar Hoover, the NSA has developed an image which implies the agency is vacuuming up more than enough incriminating phone records, emails and text/sext messages to politically torpedo any rank-and-file congressman, should that congressman step out of line.

And here's the thing: for all the agita intelligence officials express about new disclosures, those disclosures illustrate the sheer size and scope of governement surveillance. That doesn't weaken the NSA - on the contrary, it serves to politically strengthen the agency by constantly reminding lawmakers that the NSA 1) probably has absolutely everything on them and 2) could use that stuff against them.

A few weeks ago, Congressman Doe read in the Guardian that the NSA is "currently collecting the telephone records of millions of US customers of Verizon," which happens to be his phone service. In the same paper, he also read that the agency "has obtained direct access to the systems of Google, Facebook, Apple and other US Internet giants" to track potentially millions of people's online activities. Then maybe he saw the CNET story about the Obama administration working "to obtain the master encryption keys that Internet companies use to shield millions of users’ private Web communications from eavesdropping."

Then, this week, Rep. Doe read in the Wall Street Journal that the NSA has the capacity to collect up to 75 percent of all U.S. Internet traffic. He also read in the Washington Post that the NSA has a "collect it all" mentality and that in the midst of Rep. Doe's 2008 reelection campaign, the agency intercepted a "large number" of "calls placed from Washington." And, if all that wasn't enough, he heard this week from his more senior colleagues on the Intelligence Committee that these disclosures are just the "tip of the iceberg."

Now, put everything Rep. Doe learned together with his memories of July 23rd. On that day, NSA chief Keith Alexander and Director of National Intelligence James Clapper frantically convened an emergency closed-door meeting on Capitol Hill to pressure him and his congressional colleagues to vote against a bill that would merely prevent the agency from indiscriminately surveilling Americans who are not under formal criminal investigation. According to U.S. Rep. Alan Grayson (D-Fla.), in that meeting Rep. Doe learned that the NSA probably has a file on him. As the real-life Florida congressman recounted in a Current TV interview with me on August 7th:

SIROTA: One of the things in the vote on NSA surveillance that happened in the House that I was concerned about was you had meetings with high level NSA officials in the House (for the NSA) to try to pressure lawmakers to vote on the side of the NSA. Congressman Grayson, was there any perception by you that your colleagues may be a little bit nervous about voting against the NSA out of J Edgard Hoover-ish kind of fears that the NSA not only has data and information on all of us but also has a lot of information on a lot of all of you and your colleagues in the Congress?

GRAYSON: It's possible - one of my colleagues asked the NSA point blank will you give me a copy of my own record and the NSA said no, we won't. They didn't say no we don't have one. They said no we won't. So that's possible.

Rep. Doe is worried about all of this because he wants to retain his congressional seat, and one day he even might want to run for senate or governor or even president. He also doesn't want his wife and kids finding out about all the, shall we say, shenanigans he pulls when he's in D.C. and away from his home back in Bumblefuck, USA. So with all that in mind, how eager is Congressman Doe to defy NSA officials' wishes by voting to curtail the agency's power and/or launch a congressional probe into the agency's abuses?

In fact, coupled with the monetary rewards for defending the NSA and with Washington's ideological slant in favor of the National Security State, Rep. Doe - like many of his colleagues - is far more eager to say "how high" when the NSA director says "jump," even when he knows that at least some of what the NSA has done is illegal.

Looked at this way, it is hardly surprising that during his first appearance on Capitol Hill after the surveillance disclosures commenced, NSA chief Keith Alexander was treated less like a pariah than a hero by a Congress full of cowering go-along-to-get-along types like our fictional John Doe. Even less surprising is the fact that for all their rhetorical bluster about taking on the NSA, even the NSA's most outspoken congressional critics like Sens. Ron Wyden (D-Ore.) and Mark Udall (D-Colo.) have refused to take the ultimate step of following in their predecessors' path and exercising their constitutionally protected right to disclose details of NSA crimes. And perhaps least surprising of all is the fact that through all the lawbreaking, NSA chief Alexander remains as powerful - if not more powerful - as he was back when Wired profiled him in June. As the magazine's James Bamford wrote (emphasis added):

Never before has anyone in America’s intelligence sphere come close to his degree of power, the number of people under his command, the expanse of his rule, the length of his reign, or the depth of his secrecy...Inside the government, the general is regarded with a mixture of respect and fear, not unlike J. Edgar Hoover, another security figure whose tenure spanned multiple presidencies.

“We jokingly referred to him as Emperor Alexander—with good cause, because whatever Keith wants, Keith gets,” says one former senior CIA official who agreed to speak on condition of anonymity. “We would sit back literally in awe of what he was able to get from Congress, from the White House, and at the expense of everybody else.”

Thanks, in part, to the fear factor, whatever Emperor Alexander wants, he still gets - and he still getting it at the expense of everybody else. 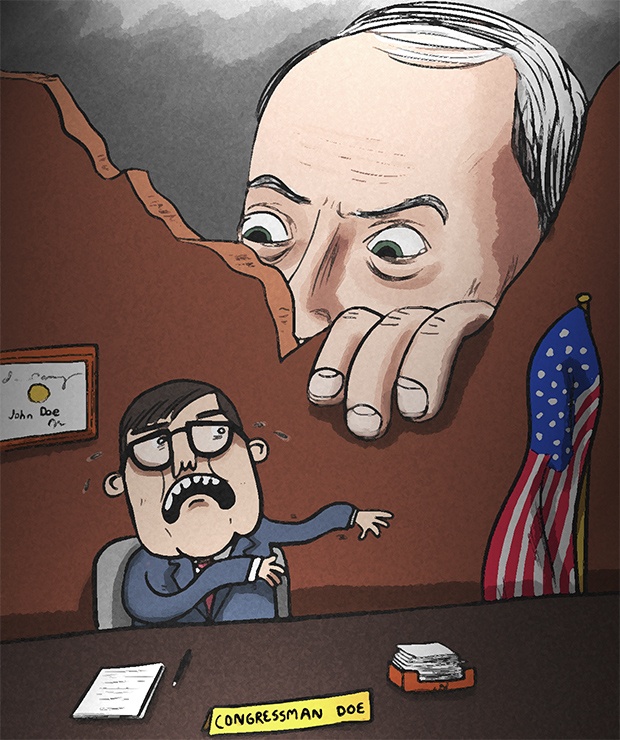